Today is the longest night up here in the Northern hemisphere, and the longest day in the South. A day of opposition, and yet strangely balanced. Winter always seems to be a time of reflection for me, so I thought I would reach out to the Vloggers out there and see what their feelings and thoughts were on this day.

We are posting these up and tagging them 20051221 on technorati, or mefeedia, or del.icio.us, or where ever folks want to. I will be linking to them all on makemedia.org over the next few hours.

Here is my video: 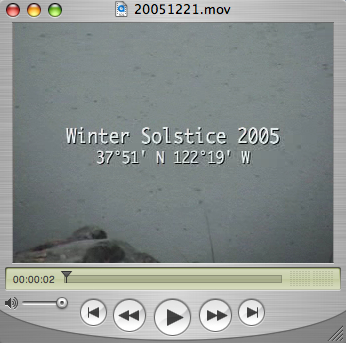 Alot happening in New York this weekend! This video was shot, edited and posted on the web, all within 30 minutes! I did this to show attendees of a “Meet the Videobloggers” Apple presentation in SoHo how easy it is.

I arrived with Ryanne, Jay, and James, from Node 101, and met up with Jan, Eric, and other vloggers.

I remember dragging my blanket through the pre-dawn air out to the living room. It was here in front of the television, when I had my first media moment that early summer morning on July 16, 1969. 1969 was an amazing year. I knew nothing of the 4 university computers (UCLA, Stanford, UCSB, and Utah) that interconnected that Autumn to form the Internet.

So here we are, nearly in 2006. It has taken about 40 years for it to happen: the Internet and Media (creation, distribution, consumption) are becoming One.

So what happened to the rockets? They never went away. They just got even cooler.

Yahoo! acquires Del.icio.us today. Now with Flickr, Yahoo! has two of the most prominent tagging sites on the web.

This is not breaking news in the blogosphere, but I thought I’d post this for archive’s sake. This is what happens when you are in meetings all day, you miss the scoops…

Wired has a great interview with Steven Soderbergh.

Questions include: “Have you thought about making a mash-up?” with the followup of: “Give me one idea for a video mash-up.”

For the last few weeks it has really sunk in. A major shift in media is underway. News so far this week:

Apple announces that NBC is joining the downloading lineup on iTunes. Apple has sold 3 million videos since it launched the new iPod video player in October. The new NBC lineup will allow users to download 11 new shows such as Law & Order, The Office, The Tonight Show With Jay Leno, and Late Night with Conan O’Brien. Just $1.99 a show. Shows from Sci-Fi Network and USA Network, both affiliated with NBC, also will be available.

CNN announces Pipeline. Up to 4 video streams of breaking news directly to you via IP. Subscription based @ $2.95/month. Unbundled cable has arrived.

Mediaweek is reporting that at the UBS 33rd Annual Global Media Conference in New York, Ross Levinsohn, president of Fox Interactive Media, said that the original Family Guy episodes will be distributed on, MySpace.com and IGN.com, as well as Fox.com next year.

I am sure I might be missing one or two announcements. They seem to be coming everyday now…

I was introduced to http://gbstv.info today by Todd over on the Yahoo Videoblogging forum. They have the seed of an idea here: The GBStv play list is built solely of user submitted videos. Users must first convert their submissions to Nullsoft’s .nsv streaming format via Shoutcast, and then upload them to the GBStv FTP server. Once uploaded, they are imported to the website where they await screening through a full content moderation system.

I had a dream last night. My 2006 iPod was a dockable remote control! It had a cradle that sat in my flat screen HDTV. I could use it like a portable Tivo and show my friends small videos on the go, or plug them in at their place….

During last week’s episode of CSI: NY, detective Danny Messer’s mobile rings to Coldplay’s
Talk — a CBS and Capitol Records $2.49 ring tone also marketed during a commercial break and on their website.