I had the privledge of being a chaperone for my older son’s 5th grade class when they went to the Museum of Modern Art a few weeks ago. I was impressed with the docents and their ability to introduce art in a hands-on way in just a few short hours. Although we could not film inside the museum, I hope this video captures the day.. 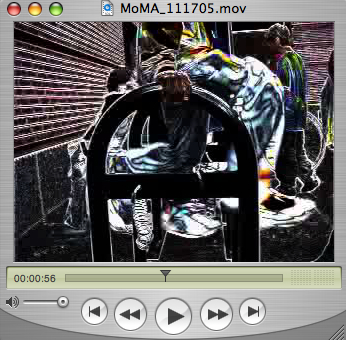 Here is a video interpretation of Rotante Dal Foro Centrale, a sculpture on the UC Berkeley Campus created by Arnaldo Pomodoro. The music in the background is the Campanile @ 2:00 pm.

Please let me know what you think of it.

I just got back from spending all day down in Pacific Grove with Endorphin. Had a chance to meet Jonathan, Glenn, and Jean, and catch up with Bob. They are just about ready to roll out an ongoing stream of HD video content! Expect to see an RSS feed on their site in the next week or so. They have a very robust studio with sound stage, theater, and 4 editing rooms. Looks like I may be collaborating with them on a project or two.

I finally got an invite into Adaptive Path’s MeasureMap! I am very excited to see how the analytics are displayed on site visits, links in and out et al. I also just upgraded WordPress to 1.5.2 so I hope it doesn’t give the site hiccups….

I had a great afternoon over at Expression College for Digital Arts in Emeryville, CA with David Toole, Enric Teller, Markus Sandy, and Schlomo Rabinowitz. Outhink and the College put together a fun mash-up live event with speedvlogging requirements on the editing side (e.g. 40 min to edit!) and SpinXpress to help us manage files between the 3 editing rooms.

J.D. Lasica (Ourmedia), Chris Ritke (49media), and Mia Garlick (Creative Commons) were also there. While we were busy editing (or in my case, trying to edit), these folks spoke to the audience about the current state of Personal Media.

Alex sounded great, and he really gave us alot to work with. Check out his new album Mile High on iTunes! 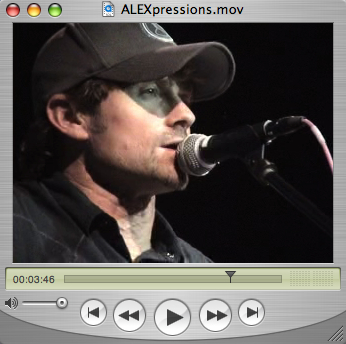 I stumbled through our alotted time, but my partner, Patrick, pulled us out of the nose dive. Patrick attends school at Expression. He says classes are 5 weeks long and very intense, so I guess he is used to the pressure. I ripped through the footage I had afterward and came up with this compilation…it just took 8x longer. Hope you enjoy it!

The most exciting thing for me when I have my DV with me is discovery. Sometimes you never know what you will find just around the corner.

I found Lou working in his garage with a friend. He was getting this old Humpback ready to be moved to a warehouse for restoration. When Lou says it will be several Winters worth of work, I believe him. Can’t wait to see how she comes along! 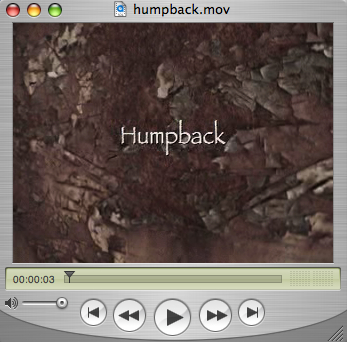 Reuters is reporting that AOL will launch Internet Television in Spring of 2006. In2TV will introduce 100 TimeWarner shows including Welcome Back Kotter, Growing Pains and Kung Fu…

Saul Hansel at the NY Times also reports that In2TV will use peer-to-peer to distribute media in an enhanced version.

I have not received confirmation, but I understand that In2TV will be running Kontiki platform. The founders are former Netscape/AOL employees that got together to launch Kontiki in 2001. Public television is using Kontiki’s grid to make their content available online as well via the Online Media Network.

In other related news, Hasbro announced today that they will provide Nickelodeon and Cartoon Network $2.99 downloads on their new portable media player (VuGo) from their Tiger Electronics division.

Today, I turned on Make Media, and Make Media must have sent you here!

What is Make Media:

MakeMedia.org is a group of Networking Creators extending the ideas behind the Personal Media Revolution.

The site will open on December 21th. Please share your thoughts on where you think it is going. What do you enjoy most about these times of change?

What does it mean to Make Media? Please let me know what it means to you.

Today Yahoo and Tivo announced consumers will be able to schedule recordings of TV shows on their TiVo box from a special Yahoo portal.

This just in: Wall Street Journal Online (subscription required) is reporting that CBS and NBC, have agreed with Comcast and DirecTV, respectively, to allow their viewers to watch popular shows anytime they want. You should be able to read the full story in tomorrow’s paper.

Shows include “Survivor” and “Law & Order: Special Victims Unit”. the price? 99 cents! What started with Tivo and was naturally extended with iPod, it appears that time shifting is here to stay.

The most amazing thing is, this is only audio, which suprised me. Update: it actually is a truncated video, but requires IE and Windows Media Player.

Regardless, iPod Video looks to have been the tipping point. The damn has burst; the wall has come down; describe it as you will. With accelerating adopting of packeted information, what changes are in store for media, both commercial AND personal in the next few years?

To share the momentum of Personal Media (Consumption AND Creation), I bring you this TechCrunch link from yesterday. It is a good starting thread comparing the Flickrs of Video. Make sure you read through the comments to find a dozen more sites that they failed to see on the first pass!

Michael B. is an incredible Elementary School Teacher. Here he is channelling Mother Nature… 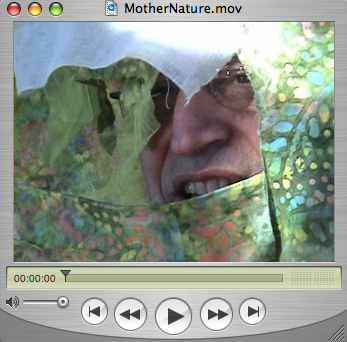 NaNoWriMo update: I am supposed to write at least 1,700 words a day. After two days I have about 1000. I better get busy tomorrow. Here is a sample of work so far:


Columns and Rows. Like a massive spreadsheet, the aged cubicles once housed productive worker bees churning out weekly reports, the latest customer survey, or notes from the last meeting. Somewhere in here was the answer he had been looking for. Still orderly and vacuous of originality, trinkets of the past lay in what one could simply describe as grave sites for the unknown office worker.

Inspired by Zadi’s HalloweenVlogfest2005, I try to capture the most about Halloween in the shortest time! 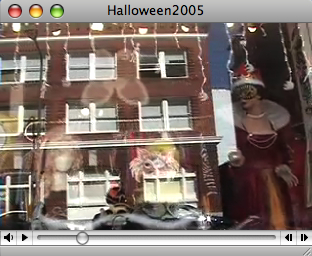 I am having problems getting .mov to compress better than .m4v. I end up with lower visual quality and a larger file. If anyone has recommendations, I am all ears.

Update: I got some great tips from Freevlog and highly recommend the site if you are learning how to do this (like me).

Shot with a Sony HC20 and edited with a stock iBook G4 and iMovie. Music is Festival De Luces, played by
Incendio.